Is Trump smarter than you think? 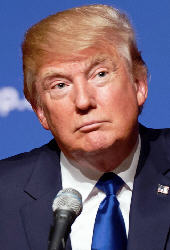 When Trump announced in 2015 that he was running for President of the United States of America, his detractors said it was just a publicity stunt for the billionaire. Nobody, except the Simpsons, could have predicted it. His none political/none correctness style attracted more and more supporters every day. This was unexpected news to him and his team. The longer he lasted in the Republican primary races, the more press he got.

Btw, if you did not notice, I am Canadian thus the .ca in the domain name. Why do I care my friend asked? Whatever the US does(any party), it affects other countries in a good or bad way.

When elected, Trump set in motion "Operation: Hard Nose" for his supporters:

you see, Trump is smart because he did not want to be President thus he had to drop from the race without making it too obvious to his supporters that believed in him. His detractors were right after all: Trump wanted free publicity. At the start of this campaign in 2015, he launched: "Operation: Drop Me!". Now, let's go back in time:

He attacked Senator John McCain: Hes not a war hero. Hes a war hero because he was captured. I like people who werent captured. Nope, he still remained in the race instead of ending it.

Then Trump called rivals as Little Marco Rubio, low energy Jeb Bush and Lyin Ted Cruz. Again, his effort with insults were not big enough to drop from the race.

When he was selected to be the Republican nominee, he was in deep trouble. It was getting serious because he wanted to be out of the race a long time ago. But he had to continue to save face.

Hillary Clinton was the favourite so he was hopeful but still, he had to make sure ... just in case.

Then Clinton said the worst thing to help out Trump: "You know, to just be grossly generalistic, you could put half of Trumps supporters into what I call the basket of deplorables. Right? The racist, sexist, homophobic, xenophobic, Islamaphobicyou name it. And unfortunately there are people like that. And he has lifted them up.

Trump was furious as hell but not for the reason his supporters wanted him to be. He was forced in a corner thus he had to find a way to lose even more votes.

He then arranged to get leaked the famous Pussygate tape. He was sure to lose the womens vote. Nope! It did not bother them.

Clinton email controversy just days before the election was not helping him and it was a blow to his plan.

It was to be a long election night and then Trump worst nightmare happened: He became the next President. He was so close to his goal of losing. While he is smart, his plan backfires on him.

Thus when elected, "Operation: Hard Nose" was in reality his backup plan "Operation: Fire Me!":

He knows the smart move for him is to get back to business/TV again: Making My Businesses Great Again! So, he will do everything he can to give his supporters pause to vote for him until the Republican Party can find a candidate for 2024.

Is Trump smart and the best President or the most incompetent President the USA ever had? You decide!

I could have used a poll, but it's too easy to manipulate. Since it's a make money online blog, action speak louder than words thus ...

I created 2 US eBay campaigns. On December 4 or near that(reduced refunds possibilities), I will give the % each camp below got from the total the amounts earned from my commissions. Heck, if I get $0.50 commission from only 1 t-shirt, then 100% will be the results but it will not be as fun. Please, do find sellers that are as close to you as possible AND within your budget. He could be a shirt, hat, bumper sticker, camping gear, a boat ... anything will count.