Posted by Steve McGrath
Since September 2005, the MIS specification was sold on a license and royalties model. Yesterday, I made it free by going with an optional advertisement model instead. I was thinking about it for many months and was considering other models. I finally settle on what I think will work the best but I won't make millions like I was hoping. I do believe in the MIS specification and what it can do in the management of multimedia files. And most people got a lot of pictures, home videos and music files. The MIS specification was already free for non-commercial applications from the start. I still keep all rights so to maintain it's stability. Why it did not work as planned? I think that the old license model was too complicated for companies on something that was too new for them. For free projects and open source projects, they feared I was using them to get into the commercial side of the business. My intentions were pure. How many times you see a new media format and the free community decided to create their own version so not to pay royalties? That's why I had made it free from the start so that they would not have to waist time to make their version. It was a catch-22 situation but not any more. Either sides don't have any excuses now not to start to use the MIS specification. The new business model I will list them on the M.I.S. site(supported product/service page) for an optional $9.97/year and offer paid support by email if they need too. I will offer other methods later on. About the MIS specification The MIS specification will help with the exchange of information(metadata) for many type of contents (music's, pictures, videos...) between creators, distributors and users. The MIS specification now have more than 200 tags of which: notes, multiple chapters, subtexts, goofs, questions, website links, resume playback from a video/audio file, tool tip for pictures, software error, multiple languages in the same .MIS file... Below is the main page of MIS Info Video after reading the .MIS for the movies. Those movies were recorded on my computer and by using Info2MIS, I was able to create a .MIS in 2 clicks using the imdb.com data and poster. The same could be done with pictures or family video but you would need to enter the information like who is in the picture, where it was taken, did something funny happened ..... 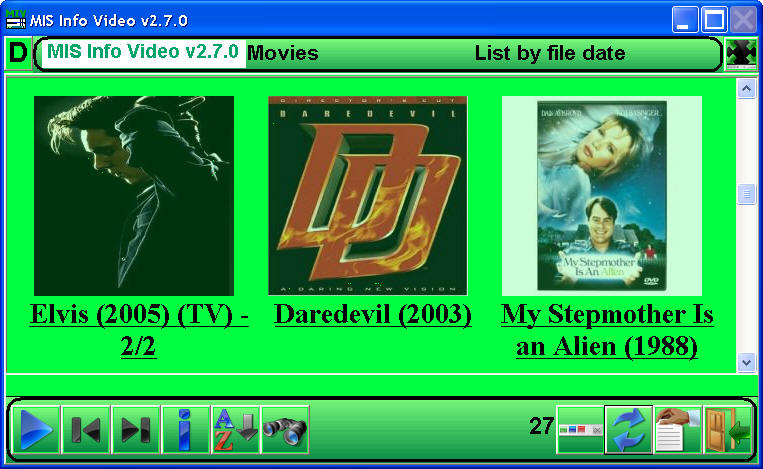 Would it be great if your DivX standalone player or my PS3Â  or your Xbox 360 could do the same? It's better than seeing 8.3 file names ;) The .MIS is a text file so if you convert a picture from jpg to wpt2(just made it up) the information will still be good in 50 years and not be lost. Only the format(codec) information would had to be change. What's next? I will have to write an official press release. I will do that for next week because this week is almost over. There are a lot of applications, free and commercial, that could use the MIS specification and I'm sure you use some of them now. Again, it's not only software but also hardware(digital picture frame/camera, DVD players, mp3 players) that can use it. You could email them to check out the MIS specification. It's now Free ;)
Keywords: Business, Entertainment, Info2MIS, MIS Info Video, Money, News, Playstation 3, Xbox 360